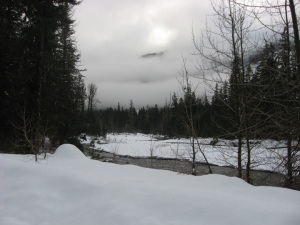 What happens when snow falls during a period of cold temperatures, and then it warms up and rains? Mist rises up and the snowpack changes to what we call Cascade concrete around here: heavy wet snow that congeals in globs. When your feet sink down into it, your legs struggle to lift your boots back up. Snowshoes help, but you still drop with every step. Eventually the snow freezes into a hard mass, a base for the next layer of snow to fall onto.

Although where I live is on the boundary between the forest and the desert, our weather is much influenced by the Pacific Ocean. We are said to have a maritime snowpack here. Moisture-laden clouds come from the west (where the ocean is) and are pushed up against the mountains. Temperature drops as elevation increases. Sometimes we sit under a bubble of air from the Arctic. Moisture falls as rain or snow, spilling over onto the east side of the mountains. When the weather comes from the southwest, as it often does, it brings warm air. I like to think that sometimes I can smell Hawaii on the wind. The alternating warm and cold makes our gunky snow. The Rocky Mountains are the Holy Grail to winter sports enthusiasts–all that powder snow! They are far from the ocean, so the snow is cold and dry and deep.