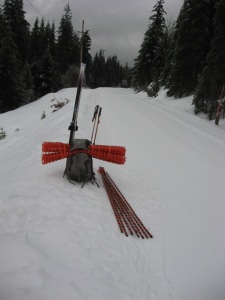 My mission? Add to the snow fencing along this section of the John Wayne Trail. The reason? Snowmobilers jumping across this old railroad bed converted to a groomed ski trail. A sure recipe for conflict between the two groups of winter recreationists. Not cool.

I accepted the mission; gathered snow fencing, eight wrapped bamboo snow poles, a handful of zip ties, and my ski gear. I drove to Crystal Springs Sno-Park. Freezing rain was in the forecast, temperatures in the low thirties. I ate my lunch in the truck. So far, so good–no rain. I bundled the snow fencing onto my pack, and tied the poles together so I could tow them on the snow behind me. Spoke to a dog musher who was thinking about going out, and the snow groomer as he returned to his truck.

As I started skiing, I quickly assessed conditions: Snow Cone. The snow has been rained on, frozen, and groomed to the consistency of the ground-up ice cubes that they serve at the county fair in a paper cone and a dollop of fruit-flavored syrup. It’s ski-able, but not ideal. Still, I was happy to be out sliding along. My pack wasn’t too heavy, and towing the poles felt like nothing at all. Even the few drops of rain didn’t bother me.

I should have looked back before I got to the work site, because I was towing practically nothing at all. There was one pole attached to my string. I skied back and saw them dropped along side the trail, one by one. I picked up the seven poles and tied good knots, chuckling inwardly at my brilliant observation about how easy it is to drag poles behind while skiing. Getting there took longer than installing the fence.

Ice was falling out of the trees and off the powerlines. Ice on top of the ungroomed snow was 3/8″ thick. I skied the snow cone back to the truck and drove home under the relentless gray sky.

One thought on “Skiing the Snow Cone”