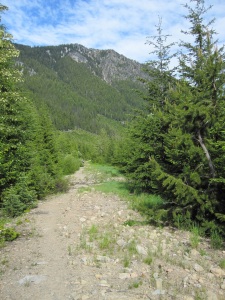 When I first started working at Cle Elum in 1991, there was still logging going on. The Spotted Owl War had been heating up for a couple of years, and it was the last hurrah for large scale road building and natural resource extraction. The Forest Service shut it down sooner than private industry. The timber market dropped. The woods got quiet. People lost jobs, moved on.

The trails stayed. Washington State’s Forest Practices Act had no provision for trails. The forest could be cut without considering recreation, as long as it was more or less cleaned up afterward. Removing the timbered overstory has a huge effect on trails; first, by exposing the soil to much more water and second, by the young trees and brush that come later. So a well-funded trail crew (does such a thing exist?) can have job security for at least 30 years, repairing erosion and cutting brush and limbs. Trees on the edge of clearcuts are more susceptible to being blown over by the wind, without the protection of the neighboring canopy. The fun never stops.

I am somewhat consoled by staying on the same district for a long time. It’s been years since I had to drive into the ditch to get out of the way of an oncoming log truck. And I have gotten to watch the trees grow back, from scruffy twisted little things to straight saplings reaching for the sky. In some places, the branches touch over my head. It begins to feel like a forest again. I have certainly put in my time cutting brush and limbs, and cursing as I find yet another place where the water runs down the trail in a rainstorm. A place that used to be sheltered, where needles and branches softened the water’s blows, and the soil was able to absorb rain.

One time, a long time ago, I was out on a field trip with a forestry expert. We were looking at a planned timber cutting unit near the Cascade crest at high elevation. This expert turned to the foresters and silviculturalist and said: “You guys just don’t get it, do you?” meaning that it would be hard to get trees to grow back in this place. “Don’t worry”, he went on. “Mother will fix it.”

And given enough time, she always does. The forest persists, in some shape or other, and we humans are less in charge than we think we are.