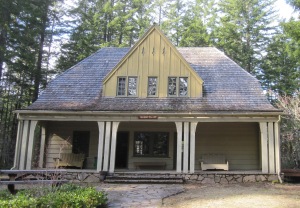 This is the Wind River Training Center, where I attended a meeting this past week. The building was built by the Civilian Conservation Corps (aka “Roosevelt’s Tree Army”) in 1935. It’s an outstanding example of what is called “Cascadian” style architecture, designed to reflect the character of the Pacific Northwest. The wood was harvested and milled locally. Inside, tall double-hung windows gather light that gleams on dark wood details–paneling, beams, flooring, ceilings, corbels, moldings and railings. A stone fireplace dominates the north wall and a portrait of first Forest Service Chief Gifford Pinchot watches over the proceedings. Every photo of GP is somber, and he has rather sad hound-dog eyes as well as an impressive early 20th century moustache. Pinchot criticized President Taft’s policies and was fired in 1910. Politics and the Forest Service have been tangled up together from the beginning, and this has not changed.

During breaks, we hung out on that wide porch talking in small groups. I also looked at photos on the walls inside. Sepia-toned group shots of men in FS uniforms from the 40s and 50s–engineers from around Washington and Oregon, Fire Control men, Timber men. All men.

Across the road is the site of the former Wind River nursery. More Cascadian style buildings, mostly residences. Other buildings had a more utilitarian 1960s feeling, warehouses and sheds and such. Closed up, paint peeling, full of the unused stuff of a couple decades ago. Once a busy ranger station, the place is now nearly abandoned. Some of the houses are occupied, but most stand empty. I was told of an old arboretum behind the buildings, so I went exploring.

I found a shelter at the beginning of a brushy trail. Inside this CCC-constructed building was a round of a very Douglas-fir, at least twelve feet in diameter. A sign stated that this round had been cut from a section 60 feet above the ground.

You never see trees that big any more.

In 1912, foresters wanted to know which tree species would thrive in the Pacific Northwest. They gathered seeds from all over the world, and planted them here. All the hardwoods failed by 1924. By the 1950s, it was clear that native conifers had an advantage. Wandering along the tangled pathways, I came across a few stunted remnants: red spruce from Maine, Spanish fir, Mongolian Scotch pine (?!), red pine from Michigan, even a cedar of Lebanon from the Middle East. There were empty spaces where other firs and spruces had died. Some trees were so damaged by heavy snow in the 50s and 60s that they gave up, leaving rotting snags.

The experiment was abandoned, and the native forest returns. Salal and bracken grow profusely, along with fast-growing red alder and young western hemlocks. As I walked, the sky echoed with the calls of ravens who have been here all along in this misty land of rain and supremely adapted native conifers.

Elegiac is the right word: 1. Of, relating to, or involving elegy or mourning or expressing sorrow for that which is irrecoverably past. I felt the presence of ghosts. This place was once the pride and joy of the people who lived and worked here, who believed in Gifford Pinchot’s vision of public forests managed for the benefit of humankind. Now porches sag, the ground that once grew seedlings has been transformed into a cow pasture, and the roads and paths are taken over by blackberry vines. The Forest Service has been downsized and demoralized and flung about by the stormy winds of politics.

Not all of the exotic trees failed. Giant sequoias were planted at Wind River and they are growing. They are not so far out of their range. Standing at their bases in a small grove, I looked up into their towering heights. The bark is furrowed, and the butts take on a graceful swell as they rise from solid roots. They have adapted.

Maybe something new has a chance to grow. The meeting I attended was for advanced sawyers. The faces in the room were similar to the faces in the old photos only not so white and not so male. We talked of chainsaws and training sawyers, safety and new technology. And a few of us went off to talk about how to keep the skill of crosscut sawing alive. In the Forest Service, the number of experienced crosscut sawyers is dwindling. Trail organizations who volunteer to help us are picking up the old saws and learning. With the fiftieth anniversary of the Wilderness Act coming in 2014, maybe there will be a resurgence of interest in traditional tools.

Whatever finds a way to thrive, I hope it will be tough and native. Rooted in the past yet adaptable. Strong and surprising.

4 thoughts on “When Things Change”