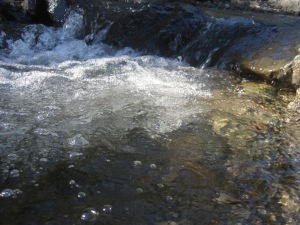 The unexpected gift of time off work in October has let to a spate of what I call “Extreme Nesting”. In a fit of single-minded focus, the living room has been freshly painted, book collection dusted and rearranged, deep corners exposed to daylight and cleaned. I washed the blinds. A box of heirloom apples was transformed into sauce, pies, and dried slices. When the fog burned away Sunday morning, I’d had enough for awhile and went to a favorite trail to stretch my legs and see if the larch trees were turning golden.

It wasn’t until I was on the trail (with an incredibly light pack–no radio or tools) that I realized how much incessant chatter was running through my mind. I’ve been thinking about power struggles far away. I’ve been thinking about the meaning of public service. Spending much of my adult life running around in the woods has not led to prestige or wealth, but I’ve found joy and companionship. I’m a Dirt Person, someone who works with her hands and stands up for the land. It’s a personal requirement that I contribute to something larger than myself, and I take stewardship seriously. So it rankles to bear witness to stewardship set aside for power plays among the supposedly high and mighty. How I’d love to get them out here for some nice humbling physical labor!

I took a break by the creek to write in my field notebook:

Watching clear creek water ripple over a rock to plunge into a gravelly pool. The way the light is at this moment, I can see the foaming and swirling under the surface, a white cloud of bubbles rising and sweeping downstream. The creekbed is shallow below the bubble pool and the water smooths out.

The water plays a constant chord–the bottom note is a deep rushing made by small cascades upstream (right ear). The middle note is most obvious to my left ear because it is angled toward the downstream rapids. On the top of the chord is the burbling burgle of the water dividing around the obstructing rock, dark and shiny with algae. I see and hear individual bubbles popping. The pool is where water and air collide and mix.

The early October sky is a rich semi-opaque blue. If I were choosing pigments on my watercolor palette, I would combine cerulean blue, cobalt blue and a little cobalt teal with a little creek water until the depth of midafternoon appeared. The blue is diluted near the horizon, purer toward the center. As I sit here, there is nothing except air between the top of my head and heaven.

I’m in shirtsleeves, comfortable in the mild sunshine and upslope breeze. The rock under my butt is solid and cool, maybe just a little damp from the deluge of rain and snow earlier in the week. A few yellowish leaves sdrop from the mountain ash near the stream, but other than that there’s not much evidence of autumn in the plants. September was warm, without the cool nights to bring on the color.

The turbulence in the pool fascinates me, and I stare at it without thinking. It is chaotic, the patterns of movement not regular or predictable. This is how liquid behaves when gravity tugs on it. Swirling, churning, spinning, flowing and upwelling in sporadic eddies.

The human mind is a seeker of pattern and meaning, and I am looking for order. I see it–the creek is contained between rocks and gravel deposits. This container changes over time, depending on storms, snowmelt, drought. In my mind’s eye, I picture the dendritic (branching) pattern of streams draining the mountains: small Beverly Creek flows into the Teanaway river which flows into the Yakima which flows into the Columbia which flows into the Pacific Ocean–small to large, but the same shapes. There is an order here, predictability.

But it is the disorder–unpredictability–that I can’t stop looking at. My senses return again and again to the bubbles rising in the pool. It is the same as watching dancing flames, or waves breaking on the beach. Each movement is similar, but never identical. I watch to see what will happen next. As I’ve been writing the light is changing, shadows darkening the far side of the creek. The darkness creates contrast, illuminating the oxygenated bubbles under the rippling surface.

It’s not hard to find the metaphor among the chaos and order of nature. It’s all around us, all the time. Things are more complex than we can imagine. Possible outcomes vary because of sensitivity to initial conditions, because the earth is dynamic. Order and predictability help us to feel secure in the big bad world. We feel safe when we know what’s coming. One of my reflections on a summer in the wilderness is how I don’t want to live in a predictable controlled environment. I like that sense of not knowing what will happen next. I’m pretty sure the sun will come up in the morning, but I’m not sure what the weather will be like. I will respond to whatever conditions arise, and part of my operating procedure is to be ready for rain and sun. Whatever happens, I’ll use what I have with me, what I can scrounge, and my innate creativity to survive. I’ll use my native intelligence, my wits, and I won’t be bored, ever.

But I didn’t come out here to think myself into a corner. Time to crawl down out of my head into the body and climb the hill. Let the thoughts and conjectures bubble and flow downstream while the legs and lungs carry me up.

There was snow at the top. I stepped out of the sun and into the shade on the north side of the ridge. Mt. Stuart and the Enchantments were frosted with white. Space opened around me, and I followed the trail someone else had broken through the foot deep snow. This is a magical place, and I would not stop until I was in the presence of what I sought.

Alpine larch (Larix lyalli) grows in the inland mountains of the greater Northwest, particularly in the Wenatchee mountains. It is extremely cold-hardy and can survive where no other conifers will grow. Those dry rocky ridges where snow forms cornices in midwinter–that is where the alpine larch can be found. Unlike most conifers, larch are deciduous. Perhaps this is their evolutionary strategy to cope with the harshness of high elevations. When the days shorten and nights cool down, the chlorophyll drains from their needles and the larches flare golden for a couple weeks. Then the needles fall.

There was a hush, a stillness. Three ravens passed over while I was climbing but they were quiet now. The sun slipped behind Iron Peak. I turned to go back down, having found what I was looking for and more.

4 thoughts on “Chaos and Order”