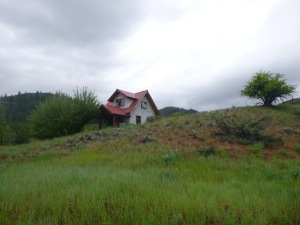 After moving three times in four weeks, Henry and I are now settling into this tiny house on the edge of Twisp. The footprint of the living space is 204 square feet, but there is a fully functional kitchen and bathroom. It reminds me of a hobbit house, being partly dug into the hillside. The cat and I access the sleeping loft via ladder. Easier for him to go up than come down, but he does it. Sometimes he waits for a lift. We have been sleeping extremely well. For me, the constant chirping of crickets is soothing. I haven’t lived in a grassland for a long time, so there are crickets and new birds to watch. Henry does his share of watching and learning too. This morning three buck deer browsed their way up the slope toward the house. All three turned their heads to look toward an ancient gnarled apple tree. Soon the cat emerged from his hiding place where he had been growling at them. He is ferociously protective of his territory, so I was glad to see he had the sense to retreat from hooved creatures much larger than himself.

It’s a good thing to have this small quiet retreat. It reminds me of a cabin or lookout tower. Life is necessarily simple due to that 204 square feet. I’ve had to be thoughtful about what I bring into it. Food is important. Clothing for work and relaxation. A few books. A few art supplies. Bedding and towels. I’ve even started a small garden of vegetables, herbs, and flowers–a challenge to see how it will go in soil consisting of glacial outwash and cobbles. Other gardeners have told me about the infinite number of microclimates in the Methow Valley and I’m discovering a few of them firsthand.

A person doesn’t need much to live a comfortable life, especially in summer.

My job right now consists of a rapidly evolving list of things to do. It’s much like cutting brush–as soon as I prune one stem, three more sprout back. It would be overwhelming if I allowed it to be. There is always too much to do when another field season is getting underway. So I set priorities, often talking things through with colleagues. Accept that some things won’t get done. Soon there will be nothing to do but go out and work on trails. But for now, there is the phone and computer screen, maps to study, tools and supplies to order, training to coordinate. And always irrigation. That’s why going home to a tiny house where a gray cat awaits is so beneficial for my perspective.

3 thoughts on “Settling In”