Jon described it as a gyre; a circling spiral. And that was exactly how we saw the birds, sweeping up and over the dry rocky meadow. Like a flock of sandpipers at the beach, they flew in perfect synchronicity and landed, settling on the ground to forage for grass seeds. As one they rose up again, circling. Everything halted as we watched in wonderment. 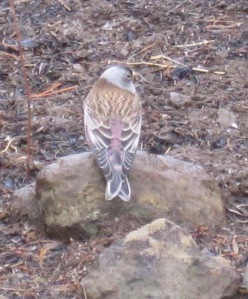 Earlier in the day I had seen one of these birds close up. It was hopping around on rocks as I hiked to the trail of the day. Spotting the movement, I stopped. As it fluttered up, pink flashed under the wings, and I could see that the head was gray. Could it be a Gray-crowned rosy finch (Leucosticte tephrocotis)? I eased the camera out of my pocket and snapped some photos to identify later. The Sibley Field Guide to Birds says that they nest in alpine or Arctic habitats.These could be migrants coming to winter range, or they could be Cascade birds taking advantage of a local food source. Either way, it was the first time I have  seen them.

The trail crew continues to prepare trails in the burned area for winter. Priority is given to those trails where the fire burned hottest. We have no idea what we will find, so although most of us have worked on these trails in past seasons, it’s all new. Scorched earth. Vistas opened up, topography exposed that has always been hidden by the cover of vegetation. The wind sounds different in trees that have no needles or boughs. Thinner and more lonesome. Each time I come to a place to dig a drainage dip, I stop and look up. Turn completely around to survey every tree. Some are burned through and lean precariously into their neighbors. I also check the roots, sometimes pushing against a blackened trunk to see if it moves. I want to know everything is going to stay put while I have my head down, digging. 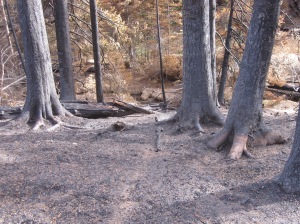 Today I found my eyes drawn toward the bases of the trees, and the shapes of roots as they disappear into the ground. This strikes me as sculptural and elegant, as well as functional. Conifers are shallow-rooted, spreading laterally to hold on and give support to the flexible tall trees. The roots are like fingers gripping the earth, and they also intertwine underground. Trees help support each other. While I feel sorrow that this fire was so large and destructive, I am also fascinated to observe how much has been made visible. The energy of the fire has simplified the landscape.

I think what I most want to be reassured about is that the place is not dead. That life is not erased forever. Fire brought a great change, giving the appearance of devastation. But as we make our way through the woods, we see that others have been there before us. Elk and deer tracks are everywhere. Coyotes and bobcats are using the trails. Yesterday we found black bear tracks in the mushy wet ash (the photo is of a front paw, with my work glove for scale). And today we found bear tracks in a different place. Gray jays appear when we stop for a break. Ravens cruise overhead. Pikas call from their hidey-holes in the talus slopes. This afternoon I stopped in a grove of big old larches that were untouched by flames. Looked up into their stiff branches covered with golden needles and felt profound gratitude. They bear cones with tiny seeds–promise of the next generation.

There is death and change on Table Mountain. At times, it’s hard to take it all in. The implications, what this means for next year. How many logs there are to cut out–we’ve been climbing over fallen trees, our clothes and faces splotched with black by the end of the day. No cutting till next summer, when more trees have fallen. Even now, decay is creeping, breaking down the dead organic material. Nothing is wasted. When the winter snow melts, there will be grasses and wildflowers in the sun. There used to be a lot more shade. Tree seedlings like sunlight and space around them, so expect to see a flush of lodgepole pine, Douglas-fir, western larch. And the places that didn’t burn will continue as they have. It’s called a mosaic, the complex pattern of burned and unburned, mature forest and young stands.

I have the privilege of watching this process, and learning.