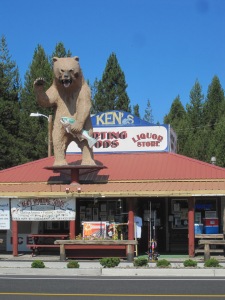 Living as I do along a well-beaten path, I sometimes need to be reminded how much I love the side trails in the Pacific Northwest. There are still places where the roads are only two lanes wide, where generic corporate slickness has not penetrated, and the traffic is comparatively light.

My fire call came at the end of last week, at the end of a hot work day. I spent half the night packing, unsure of what to expect. The next morning I pointed south, and by mid-afternoon found myself in Crescent, Oregon. There’s not much in Crescent: a Forest Service ranger station, a Shell station and mini mart, a couple restaurants, a motel, some boarded-up businesses. For the moment, there was also a fire camp popping up like mushrooms after a rain. Except that it was hot and dry.

I worked with a team of guys whose expertise is analyzing fire behavior and projecting what this particular fire might do until fire season ends in October. My contribution was field recon, observing and bringing back specific information on forest types, fuels, topography, fuel breaks, unique features that could be affected by fire. My job was go out and look for stuff. I was happy to do it. Learned some plants that were new to me, such as shasta red fir and chinquapin. Learned a little bit about predictive models. Enjoyed the company of my colleagues.

The geology of central Oregon is volcanic. The Washington Cascade volcanoes are large, glacier-carved, and not as numerous. In Oregon, you can travel easily from lava flow to crater, and timbered cinder cones are clumped in groups. The forest soils consist of pumice and some conifer needle litter. It all seems as if it was shaped recently. I was intrigued by Mt. Thielsen (the jaggedy peak on the right), which looks to me like the core of some long-ago volcano, weathered and stripped down to bare bones. Even though the Cascade crest is not knife-edged here, the elevations rise higher that 7000 feet above sea level.

I stepped onto the Pacific Crest Trail at Windigo Butte, and also followed the North Fork of the Umpqua River for a mile or so. Lodgepole pine stands go on for miles, hinting that this country has known stand-replacing fires in the past. No time to explore in depth, no time to settle into an intimate belonging to this landscape. The work was about covering ground and distance, not about letting the place slowly reveal itself. And that was all right. It was familiar enough and different enough.

Cinnamon Butte is a well-kept lookout on a 41-foot tower. The road is smooth and graveled all the way to the top. It is staffed by a paid employee, who was happy to visit. It did my heart good to know that this part of the Forest Service lives on, at least for now. An experienced pair of eyes on a mountaintop, a steady voice on the radio, plenty of time to tell a smoke from a puff of dust.

The job was over sooner than I wanted–I always want to stay out in the woods. Yesterday I made my way back northward, and looked for the things that make this part of the world unique–the bears and lumberjacks and Sasquatches. The smoke in the air, the dryland wheatfields, whitecaps on the Columbia River, wild horses on the Yakama Reservation, a rattlesnake poking around the garbage cans at a rest stop. Trees and volcanoes and sagebrush. And finally topping Manastash Ridge to drop down into the Kittitas Valley, smoke haze flattening the silhouette of Mt. Stuart against the sky.

Home. Back on the beaten path, appreciating the perspective that travel always brings.